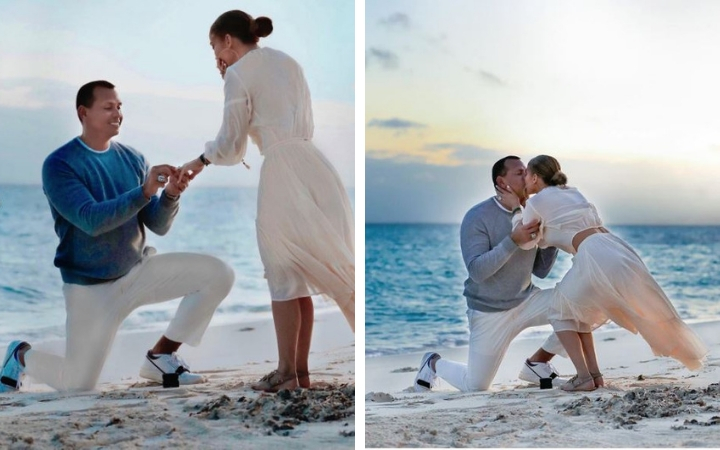 Yet again a celebrity couple is blooming! Jennifer Lopez- the singer, actress, dancer and producer had announced her royal engagement with Alex Rodriguez, former US baseball player on Saturday night.

The vacation proposal was the “best surprise ever”. J.Lo , shared the romantic pics of the beautiful beach proposal, through her Instagram. The groom, Alex Rodriguez also shared these pics on his Twitter, with a tagline- “She said Yes” ! The upcoming wedding is marked as J.Lo’s fourth and Rodriguez’s second.

Jennifer Lynn Lopez is an American singer, actress, dancer and producer. In 1991, Lopez began appearing as a Fly Girl dancer on In Living Color, where she remained a regular until she decided to pursue an acting career in 1993. For her first leading role in the 1997 Selena biopic of the same name, Lopez received a Golden Globe nomination and became the first Latin actress to earn over US$1 million for a film. She went on to star in Anaconda (1997) and Out of Sight (1998), later establishing herself as the highest-paid Latin actress in Hollywood.

Alexander Emmanuel Rodriguez, nicknamed “A-Rod”, is an American former professional baseball shortstop and third baseman. He played 22 seasons in Major League Baseball (MLB) for the Seattle Mariners, Texas Rangers, and New York Yankees. Rodriguez began his professional career as one of the sport’s most highly touted prospects and is considered one of the greatest baseball players of all time.